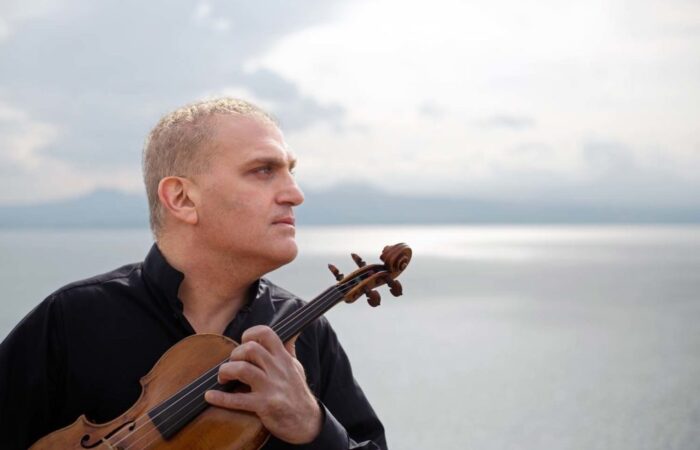 «Madoyan has the mellifluousness
of tone and the well-honed cantabile quality to bring off youthful pleasantries.» (The Strad)

The virtuosity of the violinist Nikolay Madoyan has been striking the critics and music lovers since his young age. Madoyan is a musician of the phenomenal aptitude, and has been appearing throughout the world with leading orchestras and renowned conductors.

As a child prodigy, Nikolay Madoyan was admitted to the prestigious Tchaikovsky music school in Yerevan, where he studied under professor H. Bogdanyan. The legendary violin Professor Zakhar Bron, vastly impressed by the 13-year-olds blooming talent, invited Madoyan to continue his studies at the Novosibirsk Glinka Conservatory wunderkind class. The following years became triumphant for Madoyan – he won the Grand Prize at the International Tchaikovsky Competition for Young Violinists in Novosibirsk, Russia and became the laureate and winner of the Special Jury Prize at the International K. Lipinski and H. Wieniawski Competition for Young Violinists in Poland.

Together with Prof. Bron’s wunderkind class, at the invitation of the Lübeck Music Academy, Madoyan moved to live and study in Germany where he made a sensational debut at the Schleswig-Holstein Musiс Festival with the Mariinsky Theater Orchestra conducted by Valery Gergiev. The European public was stunned by the young musician’s inimitable performing artistry and technical mastery.

«Nikolay Madoyan is an outstanding talent, he is an excellent violinist, a rare poet and a rightful master who sets the bar for other violinists. His playing can be compared to a delightful diamond that sparkles with indescribable colors.» (Isaac Stern)

After graduating from the Lübeck Academy, Madoyan launched the tremendously successful series of concert tours in Germany with the London Mozart Players chamber orchestra conducted by Matthias Bamert. Another notable appearance was a major tour of the United Kingdom with the Novosibirsk Philharmonic Orchestra, where among other works he played the Tchaikovsky Violin Concerto conducted by Arnold Katz – and captivated audiences and critics alike: «This was a highly assured reading with an intensity and depth of understanding which belied his youth. Tempi in the opening movement were beautifully judged though the orchestral accompaniment was consistently low key. The central Canzonetta flowed beautifully and was most moving while the finale provided a fiery virtuoso display.» (Western Mail, Michael Bell)

Madoyan took master classes from outstanding violinists Isaac Stern and Miriam Solovieff and for years he would perform together with Isaac Stern in France and other countries.

Famous for his virtuoso performance of extremely complex and very large music pieces, Nikolay Madoyan performs them with the highest technical skill and musical expression, re-establishing the original philosophy and an ingenious character of a composer.

«The event of the evening and the driving force of the concert, however, was Nikolay Madoyan. Modest in his appearance and performance style he gave a masterly interpretation of Mozart’s beautiful concerto in A major. Rising above the technical difficulties, Madoyan’s tone was cultivated and his interpretation carefully thought out – a performance of genius!» (Kultur aus Köln)

European newspapers and magazines highly praised Madoyan’s CD records, among them The Strad and Gramophone reviews, which specifically highlighted the releases of Prokofiev’s Violin Sonatas as well as his performance of Grieg’s Violin Sonatas as one of the best. Gramophone paralleled his reading of Prokofiev’s Violin Sonatas and Five Melodies with those of Itzhak Perlman stating «… Of the two performances under review… Nikolay Madoyan, a highly gifted product of Zachar Bron’s school… has a natural feel for the right inflection… his is the more thought-provoking…»

Madoyan was the founder of the Madoyan-Westenholz-Dinitzen trio, which successfully toured around Europe. A tremendously fruitful collaboration of Nikolay Madoyan and the pianist Elizabeth Westenholz resulted in highly acclaimed CDs, released by Kontrapunkt and Cowbell, featuring violin sonatas by Mendelsohn, Grieg, Schubert, Prokofiev, Strauss and Franck. Gramophone has given high praise for their artistic collaboration: «Madoyan and Westenholz are a strong, articulate, well-proportioned and mutually reciprocal partnership.»

Nikolay Madoyan has also been touring with recitals – the true gems are his brilliant readings of Bach’s Sonatas and Partitas for Solo Violin, Beethoven’s Ten Sonatas for Violin and Piano, Ysaye’s Six Sonatas and the works of Paganini.

Madoyan’s performances with the Netherlands and Rotterdam Symphonic Orchestras and Cologne Chamber Orchestra drew high praise in the local press.

Among Madoyan’s most recent extraordinary successes is an impressive performance of all six Paganini’s Violin Concertos played by memory in one concert, the first time in history, with immaculate virtuosity and awe- inspiring musicality, which can certainly be recorded in the chronicles as an epochal contribution to the art of violin performance.

Madoyan’s innovative method of muscle balancing technique during a play helped to pave his way into The Guinness World Records. This methodology facilitated him to bring about a continuous performance of complex classical compositions lasting more than thirty-three hours with five-minute breaks every hour. The most stunning achievement was the fact that his quality of play had remained consistent throughout the complete time of performance and the pieces played at the end of the performance sounded as robust, clean and sophisticated as the ones played in the beginning.

Nikolay Madoyan has been bestowed the title of «Honorary Professor» at the Yerevan Conservatory and the title of «Merited Artist of Armenia» for the supreme mastery and excellence in the promotion of arts. He has contributed greatly to promoting the violin works of Armenian composers. In 2003 Madoyan received the President Prize of The Republic of Armenia for the best performance of the fifteen violin miniatures created by the 17-20 centuries outstanding composers.

Throughout his career, there is almost no composer left whose works have not been masterfully played by Madoyan. Mesmerizing sound re-production and accumulation of the vast repertoire have always been the key to his successful performances around the globe. His profound spiritual world and understanding of the philosophy of music formed Nikolay Madoyan’s own original charisma in the world of violin art.

Nikolay plays a Guarneri violin of the early 18th century.
Nikolay Madoyan is represented worldwide by Music MetaUniVerse Inc. and by Italconcert in Europe.