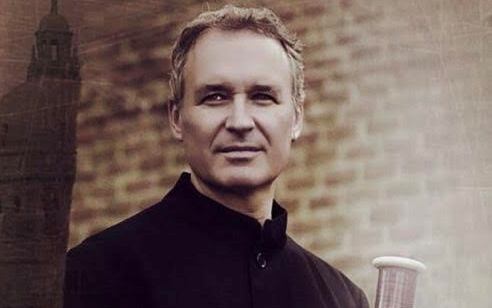 He began his musical studies in 1982 and in 1987 he studied the bassoon, an instrument with which he quickly achieved high recognition among teachers and musical groups in Spain, winning a place in the RTVE symphony orchestra in the year 1993 and in 1995 that of conservatory teacher of medium grade.
In 1990 he moved from Valencia to Madrid to pursue higher studies at the Royal Conservatory of Music, with the professor of bassoon D.Vicente Merenciano, obtaining the highest qualifications, prizes and awards granted by said Center;  he subsequently perfects his training with bassoonists and musicians of international prestige.
He delved into the study of the contrabassoon and its possibilities when this instrument was practically unknown in Spain, being the first bassoonist in Spain to hold a position as contrabassoon teacher at a higher conservatory, and since 2004 at the higher music conservatory of the País Vasco, Donosti ( MUSIKENE)
Vicente Alario has officially taught in a dozen conservatories and music schools as a bassoon teacher, master’s degree in solo performance, orchestral repertoire or chamber music, among which the Superior of the Balearic Islands and Superior of Donosti ( Musikene), Katerina Gurska Superior Center, and San Lorenzo de El Escorial or Móstoles in Madrid.
From the 2022/2023 academic year he will be part of the bassoon chair at the Forum Musikae High School.
This extensive didactic experience, together with experience as a performer and soloist in the symphony orchestra and chamber music, is of great help to students seeking solutions to technical and artistic problems and in choosing and perfecting the construction and scraping of reeds for the bassoon.

At the same time, he has prepared the group of bassoons and woodwind section of different student orchestras from all over Spain and has taught master classes in different higher music centers.

As a bassoon player he has been a member of the RTVE symphony orchestra since 1993 and his main bassoon since 2013, he is a member of the wind quintet “Madrid Cámara”, an active participant in the chamber music cycles organized by RNE classical radio and is invited to the main orchestras to collaborate as first bassoon.
Vicente Alario has more than 2000 concerts in his experience as a performer and has recorded most of the important chamber music works where the bassoon is involved.