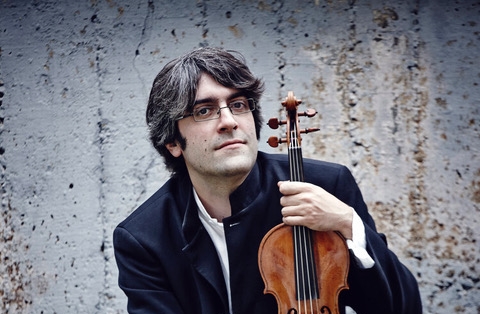 Pablo Suárez was born in Madrid and studied with Nicolás Chumachenco at  the Hochschule für Musik in Freiburg, with Salvatore Accardo at the  Accademia Walter Stauffer in Cremona and with Agustín Dumay in Brussels.  They have also had a great influence on his training: Gonçal Comellas, Víctor  Martín, J. Ellermann, Franco Gulli and Igor Ozim.

He has offered numerous concerts and recitals in Europe, making recordings  for Radio France, RAI Italia and Radio Televisión Española. It is worth noting  his recording of the complete solo violin sonatas by E. Ysaÿe, for the Solé  Recordings label, obtaining the Gold Melómano.

In recent years he has combined this activity with recitals, recordings, solo  concerts, chamber music and master classes.

His performances as a soloist are noteworthy interpreting Vivaldi’s Four  Seasons together with La Tempestad and the actress Núria Espert in the last  edition of the International Festival “Canarias Artes Escénicas”, as well as in  the 28th edition of “Soriano Musical Autumn”.

Recently, Pablo Suárez has been invited as a professor of first violins at the  JONDE (Youth National Orchestra of Spain) and the Youth Orchestra of the  Region of Murcia, and has given courses and master classes at the Badajoz

During the years 2013 and 2020 he is a violin teacher at the Superior  Conservatory of Music of Aragon.

During the past and current season 2021-2022, he collaborates as guest  concertmaster in the City of Granada Orchestra, National Orchestra of Spain,  Tenerife Symphony Orchestra and Córdoba Orchestra. Work that he  combines with the artistic direction of the Ensemble Praeteritum and first  violin of the early music group La Tempestad, with whom he performs at the  Círculo de Bellas Artes in Madrid, Autumn Musical Soriano, Zaragoza  Auditorium, Círculo das Artes de Lugo.