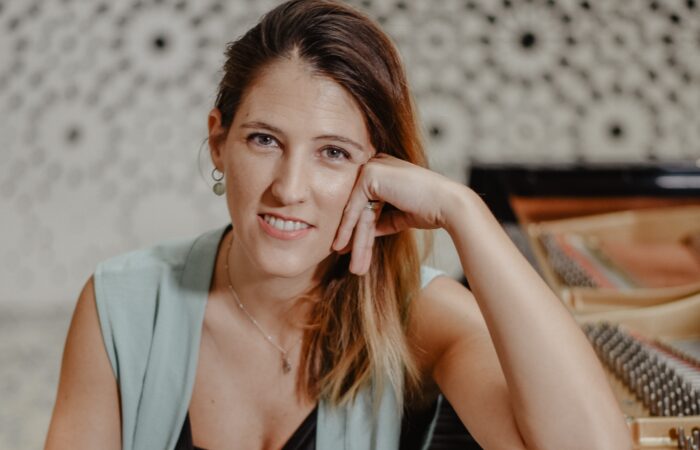 A brilliant and versatile artist, internationally renowned for her prisma sonoro, energy, and personality on the stage; chosen as the representative of Musical Spanish Culture in Italy by the European Union National Institute for Culture (EUNIC).

Born in Córdoba, she forged her career as a pianist between her native city and Milán. It is in the art lover’s city, where she resided for thirteen years and accomplished two master’s degrees in Piano Interpretation and Chamber Music, in addition to the diploma degree in Musical Education from the University of Education and Sciences of Córdoba. Gaitán specialized in Spanish and Italian repertoire, in Al-Ándalus and contemporary music, as well as playing the harpsichord. She studied under the tutelage of great pianists, amongst them Paolo Bordoni, Jorge Luis Prats, Rita Wagner, Alexander Kandelaki, Claudio Martinez Mehner, Pietro Soraci, Rafael Quero, Larisa Tedtoeva, and Emanuela Piemonti.

Her fervent work and incessant search to discover new repertoires have led her to obtain numerous acknowledgments and awards such as “Marca España” artist. Recognitions such as that open important pathways to cultural exchange, nationally and internationally. With the contributions of the Nauta Institute and Spain Military Arts Academy, well established organizations, Gaitán was able to promote international relationships amongst the United States and Spain.

She has been nominated to the Princess of Girona Award in 2018 given by the Queen Mrs. Letizia, as well as the Top 100 Women Leaders in Spain. In addition, she has obtained awards at international contests as a soloist or as part of chamber ensembles such as the VIº Contest Antonio Salieri, the XIº International Contest Città di Padova, the XVIº Award Antonio Beltrami, the Vº Contest for Young Interpreters Città di Lissone, and the VIIº International Contest Montichiari in Italia.

Gaitán’s most recent performances have been in theaters and stages around the world such as Teatro alla Scala, Auditorium La Verdi of Milán, Theater Argentina of Roma, Theater Bibiena of Mantova, in Italy; Philharmonic of Kiev, in Ukraine; Lewis Auditorium of Flagler and The Palladium Theater, in the United States; Theater Principal of Mahón, Theater Falla of Cádiz, Auditorium ADDA of Alicante, Theater Monumental of Madrid, in Spain; and recognized Unesco Patrimonies such as the Alcázar of Segovia, Paseo del Prado of Madrid, the Mezquita Catedral, archeological site Medina Azahara of Córdoba, and the Amphitheater of Dürres in Albania, amongst many others.

As a soloist, she has played with the Orchestra Chamber of Vienna, the Staatsphilharmonie Rheinland-Pfalz in Germany, Orchestra of Córdoba, Orchestra of Granada, Municipal Symphonic Band of Madrid, Orchestra Milano Classica, and Symphonic Orchestra G. Verdi under the musical conduction of E.Syrkin, Alexander Prior, S.Fedoseev, Marco Pace, Nahel Al Halabi, and Carlos Domínguez-Nieto. Gaitán is in consistent collaboration with musicians such as Mikhail Milman of the Quartet Kopelman, Sergey Teslya, Mario Hossen, Luisa Sello y Chiara Torselli.

She has published a double record release from her interpretation “Images of Spain through the Dance” for the distinguished Italian magazine Amadeus and for the Swiss label Bam Music International, which has over two million of downloads. Gaitán has also recorded music for the movie “Fiore” of Claudio Giovannesi, finalist at the Cannes Film Festival 2016.  Furthermore, in May of 2022 her new record “Pianistic Alhajas” will be released next to al kanún de Aziz Samsaoui.

Maria Dolores Gaitán supports the necessity of giving voice and visibility to the female musical artists. Her work towards gender equality is present through the releasing Spanish women’s contemporary oeuvre for the project “Bartok`s Challenge” requested by National Center of Spanish Musical Diffusion (CNDM) and Andalucía’s Board for the XVº Spanish Musical Festival of Cádiz.

Gaitán has made world premieres of a new creation contributing to broaden the current musical repertoire such as “Hebrew Rapsody” and Capriccio Spagnolo of Danilo Lorenzini, “Iquitum” of Valter Sivilotti, “The River’s Memory” of Tomás Marco and “Homage to Ziryab” of David del Puerto.

From her multidisciplinary angle, she collaborated in projects with creators of different artistic branches such as the painter Manuel León, the designer Palomo Spain, the chef Paco Morales or the writer Jacobo Bergareche.

Foundress and director since 2010 of International Festival of Piano Guadalquivir develop in Córdoba, Jaén, and Milán, distinguished by its quality and innovation with the VIIIº Award Hasday Ibn Shaprut and the oficial event of the National Festivity of Spain in Milán.

Regarding the education sector, Gaitán has given graduate classes at the New Bulgarian University of Sofía, Bulgaria; workshops in the Cultural Art of Ponte Vedra, Florida; and as an External / Affiliated professor at the Conservatory Chicano Muñoz of Lucena, Spain.