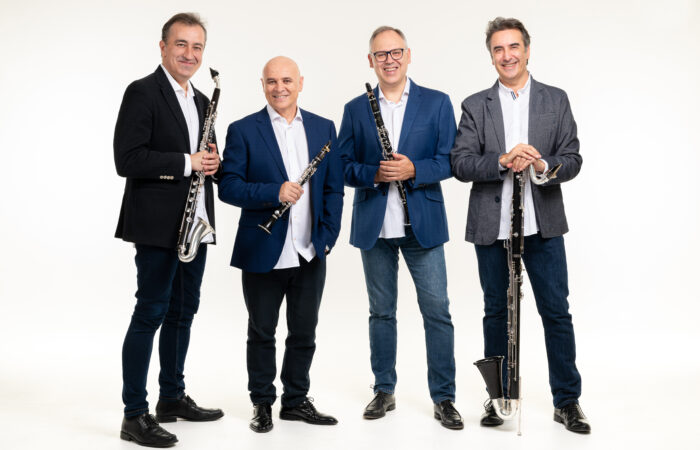 MAD4clarinets is bearing the consideration of being one of the key reference quartets in today’s music scene.

They made their presentation in 2004 in the chamber hall of the Auditorium Canal de Isabel II in Madrid.

This concert was recorded and broadcast by the National Spanish Radio.
MAD4clarinets’ members take part in the most prestigious national and international festivals. Their most remarkable successes have taken place in Oﬀ Arteria Festival, COMA Festival, World Clarinet Congress Clarinetfest 2015, and the Centre of Fine Arts in San Juan de Puerto Rico, etc.

Among their shows, we can highlight the absolute premiere of Cristóbal Halffter “Concierto a Cuatro” (2011) in the National Auditory of Madrid, together with Madrid’s Regional Orchestra; a premiere of Béla Kovács’ “Hommage to Manuel de Falla” adaptation for quartet, written by the master and dedicated to MAD4clarinets after being renamed “À la ﬂamenca”, within the context of the Clarinet World Congress “ClarinetFest” (2015); plus the premiere in Spain of concert number 2 “Silvianum” by F. Cibulka for clarinet quartet and symphony band performed at the Monumental Theater in Madrid featured by the Madrid Municipal Symphony Band (2016).

In June 2017, all these works were presented at the Fine Arts School in San Juan de Puerto Rico where they enjoyed great success both among critique and audience.
In November 2019, the ﬁrst performance of the work for four clarinets and symphony band “Flamenquísimo in concert op. 112” written by composer J. Susi is carried out within the VIII Clarinet National Congress celebrated in Valencia. In November 2020, they take part in COMA’20 Festival with ﬁve premieres of Spanish music written for and dedicated to MAD4clarinets in Madrid’s Auditorium CentroCentro.

In 2022 they have presented their first record project Hommage à Béla Kovács with the world’s first recording in version for clarinet quartet of several of the famous tributes dedicated to great composers in history by the great Hungarian clarinettist. All these quartets have been written and dedicated to MAD4Clarinets.

MAD4clarinets are SELMER and Vandoren artists.