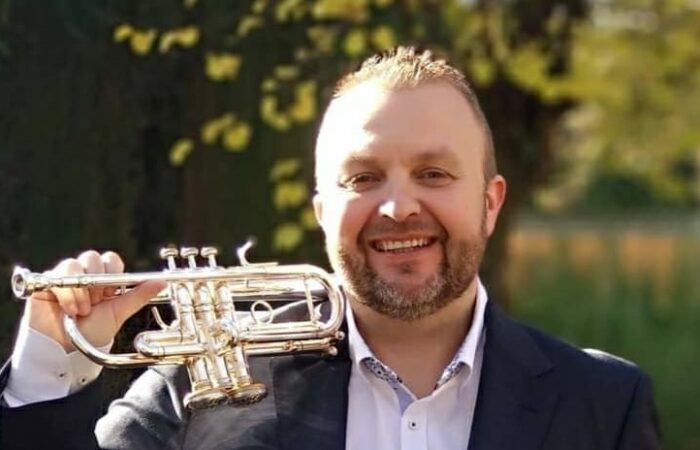 Born in Ceuta. He began his musical studies with his father Aniceto Giner Arranz. Later he  expands them at the “Victoria Eugenia” Superior Conservatory of Music in Granada, obtaining the  title of Superior Professor of Trumpet and Chamber Music. He receives the Extraordinary Middle  Grade Award and the Extraordinary Higher Grade Award in the specialty of trumpet in addition to  the Honorable Mention of Middle Grade and Honorable Mention of Higher Grade in the specialty  of Chamber Music. Jorge Giner is the first and only trumpeter in the history of this conservatory to  receive such awards.

By audition in 2000 he occupied the position of trumpet as co-soloist of the City of Granada  Orchestra (OCG), with which he toured Spain, Austria and Germany performing in the most  prestigious venues in Europe such as the Philarmonie de Berlin or the Alt’Oper in Frankfurt among  many others. He held this position until 2002, in which by competition-opposition he obtained the  position as principal trumpet of the Music Band of the Granada City, interpreting the concerts of  Haydn, Hummel and Tomasi. In 2004 by competition-opposition he was appointed Professor of  Music and Performing Arts of the Junta de Andalucía, being appointed in 2019 Catedrático of  Music and Performing Arts in the specialty of trumpet.

The first Cd of Granada Brass El Hombre Elefante appeared to the public in 2003, in 2007  his second Cd Rendezvous with the tuba soloist Vicente López (with great success by the critics)  and in August 2015 his third work called Granada Brass Suite with great reception by the public  and the press. In April 2019 Granada Brass made the recording of their fourth CD titled 20 on the  occasion of the group’s 20th anniversary, with the absolute premiere of Ángel López Carreño’s  Festive Concert for brass quintet and symphonic band. Jorge Giner has recorded two albums with  the City of Granada Orchestra: Rodrigo-Concert of Aranjuez and Estancias-Revueltas.

As first trumpet he has performed concerts with the Orchestra and Choir of Radio Televisión  Española (OCRTVE), Orquesta Ciudad de Granada (OCG), Orquesta de Dusseldorf, Orquesta de  Cámara Andaluza (OCA), Orquesta Ciudad de Almería (OCAL ) or the Córdoba Symphony  Orchestra among others and with soloists such as Elizabeth leonskaja, Fabio Biondi, Michael  Thomas and Plácido Domingo. His performances with the Andalusian Chamber Orchestra under the  direction of Michael Thomas and with the Orquesta Ciudad de Almería under the direction of  Enrique Rueda, from the Brandenburg concert number 2 by Johann Sebastian Bach, were very  outstanding. This work was performed by the trumpeter on a tour of different spanish provinces.

He combines his concert activity with teaching, giving classes in the Orchestra and in the  Andalusian Program for Young Performers of the Young Orchestra of Andalusia (OJA) and in the  Youth Orchestra of the Community of Madrid. He teaches trumpet improvement courses throughout  the entire Spanish geography for more than twenty years. He has taught trumpet classes at the  Conservatorio Statale di Musica Giuseppe Verdi in Turin and at the Licino Recife Conservatory in  Frosinone.

He studied Master at the Rey Juan Carlos University of Madrid with his work The Trumpet  in the 17th and 18th centuries, the use of the instrument in the cathedrals of Granada and Jaén  during the 2012/2013 academic year, being valued with the highest marks. In 2018 he obtained the  degree of Doctor at the URJC with his thesis entitled Use and function of the trumpet in the most  representative Andalusian cathedrals during the seventeenth and eighteenth centuries obtaining  outstanding cum laude in it. He has published two books: The Trumpet in the Spanish Court and the  Andalusian Cathedrals in 2020 and Trumpet Memory in 2021.

Jorge Giner is the creator of the platform #nosquedamosconlatrumpeta and host of his  internet program. This international platform for online trumpeters is made up of interpreters,  teachers and students from conservatories, universities and schools around the world. More than 70  programs with male and female teachers from all over the planet have been broadcast on the  internet channel, generating unpublished documentation so far. This has created access to open  educational resources for the entire educational community that has reached more than 25 countries.

Currently Jorge Giner is Professor of trumpet with permanent assignment at the  Conservatorio Superior de Música “Andrés de Vandelvira” in Jaén. Jorge Giner belongs to the  Stomvi staff, performing with the trumpets and cornets of the Titan series from the famous house of  musical instruments.