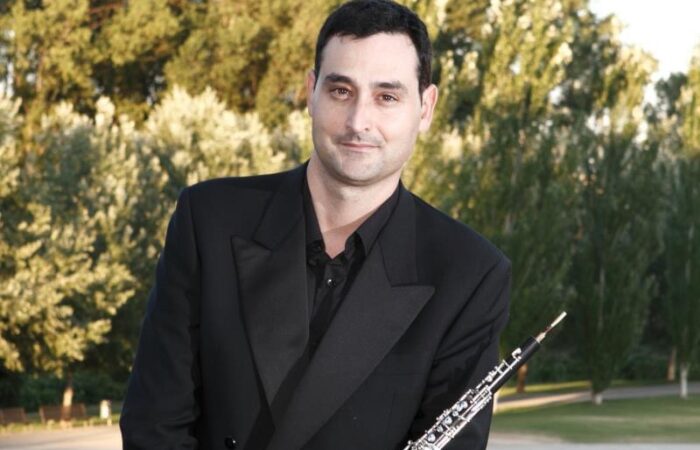 Born in Buñol, starts to play oboe with Jesús Perelló in “La Artística” Musical Society. He completes Bachelor degree in the “Joaquín Rodrigo” music college in Valencia with professor J. Fuster and professor F. Salanova. Later he continues studying with the international soloist Emmanuel Abbühl, with whom he has shared stage.

He debuted at the age of 16 in “El Palau de la Música” in Valencia playing the double concert for oboe and bassoon by A. Vivaldi, which was live-streamed in the main classical radio programme of Spain (“Radio Clásica”). He has played in several important concert halls such as the Thyssen Museum Bornemisza in Madrid, La Villa cultural centre, Victoria Eugenia theatre, Marcelino Botín foundation, Santo Domingo de la Calzada cathedral, Palau de la Música, La Redonda cathedral in Logroño…

He has been invited to teach in the “Voralberger Landeskonservatorium” in Feldkirch (Austria) and the “Lahti Conservatory” in Finland.

Since the beginning of his career, he has been willingly performing chamber music with the “Jacques Ibert” wind quintet and has collaborated with the “Beethoven String Trio” playing an oboe quartet. He has founded “Il Cimento Dell´Armonia”, which is an historical performing group who has been worked on recovering the historical heritage. This project culminated with the recording of the CD “Entre Cielo y Tierra”.

At the age of 19 he won the oppositions and became oboe professor in the professional conservatory of music “Eliseo Pinedo” in La Rioja.