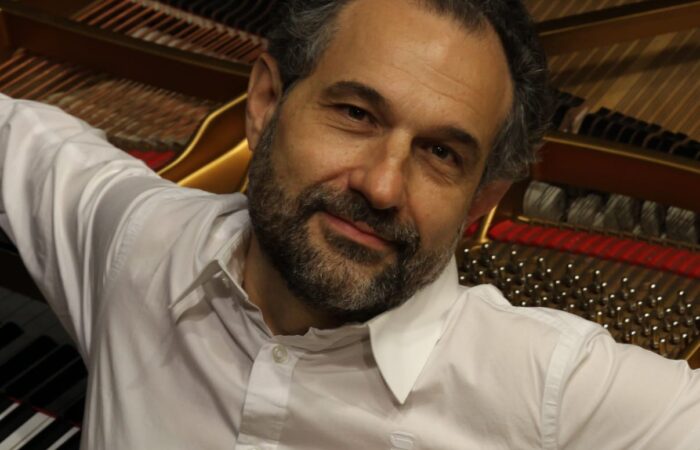 Eduardo Ponce was born in 1962 in Madrid, city where he studied under the direction of Mª Teresa Fúster, Pedro Lerma and Manuel Carra at the Royal Conservatory (Real Conservatorio Superior de Música de Madrid). He was able to expand his training abroad after having been awarded Scholarships from the Ministry of Culture and Casa Hazen, in memory of Rosa Sabater, pianist with whom he had the opportunity to work with in the “Manuel de Falla” courses in Granada and in the “Music in Compostela” in Santiago. The advice of the great Russian pianist Ekaterina Novitskaya, after hearing him in an audition, directed his steps toward Belgium.

Meeting Eduardo del Pueyo in Belgium in 1983 marked a decisive turning point in the course of his career. This pianist exerted an enormous influence on Ponce in the deepening of his pianistic search and in all of his subsequent musical training. Through the following years he studied simultaneously with del Pueyo along with two of his most prominent disciples: first at the Royal Conservatory of Liège, with the American pianist Jo Alfidi, who had previously studied in the United States with Rosina Lhévinne and Dora Zaslavsky; and, later, in the Royal Conservatory of Brussels with the Mexican pianist Patricia Montero, who had previously studied with Pierre Sancan in Paris.

In 1989, Ponce moved to Germany to pursue postgraduate studies (Künstlerische Abschlussprüfung and Konzertexamen) at the Hochschule für Musik at Karlsruhe, first under the direction of Fany Solter, and later attended classes of Estonian pianist Kalle Randalu, with whom he carried out fruitful repertoire work as well as receiving lessons from some of the most prestigious teachers in the world such as Lev Vlasenko or Nina Svetlanova. Later, Ponce completed a Master of Chamber Music at the same University and read his Master´s dissertation on Visions of the Amen for two pianos by Olivier Messiaen. He later completed the modules of Research Methodologies and Historical Heritage in the Master´s program in Hispanic Music at the University of Salamanca, recently (2021) finishing his doctoral research in the same University.

One of the first steps which promoted his concert activity, and which later has progressively led him to important stage venues through the years, was winning 1st prize in the national contest “Ciudad de Melilla” in 1987. Ponce has performed at the Festivals of Deiá, Florilegio Salmantino, Toledo, Mostra Sonora Sueca, Odyssiad Colorado, Stravaganza Bulgaria, Hambacher Musikfest, La Mancha or Arte Sacro Madrid; and on many international stages such as the Colón Theater in A Coruña, the Real Coliseo Carlos III in El Escorial, Patio Herreriano in Valladolid, Königsberg Opera House, Rivoli Oporto Theater, Salons de la Littéraire at Liège, Minsk Philharmonic, Steinway Hall in New York, Griffin Concert Hall in Fort Collins, Stadtschloss Weimar (with the Chamber Orchestra under the direction of Max Pommer performing Malédiction by F. Liszt), Ettlinger Schloss, Synagogue del Tránsito, Weinbrenner Saal Baden-Baden (with the Symphony Orchestra under the direction of Werner Stiefel performing Prokofiev´s 2nd Concerto), Stadttheater Neustadt, and the Central Theater in Seville.

Having won the “Luís Coleman” Prize for Spanish music, Ponce dedicates much of his work to this repertoire, and in a special way, to music that has traditionally been relegated from concert hall programming, thus rescuing works buried in oblivion such as Conrado del Campo’s Fantasía Castellana, which he performed as a soloist at the National Auditorium with the Madrid Symphony Orchestra under the direction of José-Ramón Encinar. Ponce is also is one of the few pianists that performs the complete Suite Iberia by Isaac Albéniz in concert.

He has also performed regularly in Europe and America for the past two decades with the German pianist Sophia Hase, with whom he forms the Atlantis Piano Duo, interpreting a vast repertoire ranging from baroque to avant-garde music, including contemporary works written especially for them.

Ponce has recorded for various record labels including Radio Nacional de España with a recital-portrait, and the Bella Musica label with the 1st Concerto for piano and orchestra by Dmitrij Shostakowitsch; as well as appearing in television productions for Televisión Española, Südwestfunk and Zweites Deutsches Fernsehen (Germany).

In recent years, he has focused a large part of his work on the rediscovery of the Spanish romantic composer, Federico Olmeda, recording a selection of his most representative pieces for the Verso label, and receiving unanimous congratulatory remarks of the plenary session of the Royal Academy of Fine Arts of San Fernando in Madrid.

Eduardo Ponce has consistently combined his artistic activity with teaching, something that has been a true vocation since 1996, occupying a piano chair at the Higher Conservatory of Music of Castilla y León (Salamanca), also regularly collaborating through the Erasmus program with the Weimar Musikhochschule.

Ponce has also participated as a lecturer for the Odyssiad Festival, the Paideia Galiza Foundation or the University of Colorado in Fort Collins, delivering seminars on Robert Schumann, Frederic Mompou, Federico Olmeda, Isaac Albéniz, or Cristóbal Halffter.

Ponce complements his professional activity by giving numerous courses, master classes and workshops in Universities, Conservatories and Foundations in Spain, Germany and the United States, as well as frequently being called on to form a part of juries for national and international competitions.