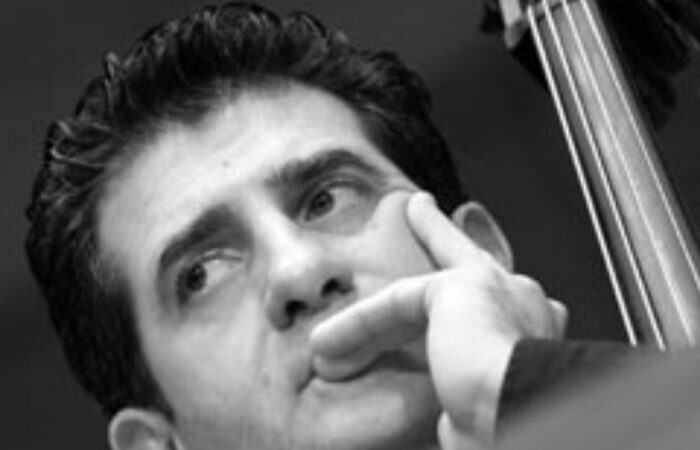 He was born in Barcelona (Spain) in 1962. He studied music at the Choir of Montserrat, with which he was soloist. In this stage are notable recordings for Harmonia Mundi label the “Vespers for the Blessed Virgine”, by Claudio Monteverdi, or the “Mass Salisburgensis” by Orazio Benevoli, which was Album of the Year in Germany. Later, he entered to the Conservatory of Barcelona to continue his double bass studies with Ferrán Sala in a time where he received the highest ratings. Furthered his studies at the Musikhochschule in Vienna with Ludwig Streicher, and took courses with Franco Petracci, Rodney Slatford and Klaus Stoll.

He is currently Assistant Professor at the Reina Sofía School of Music in the Unidad Editorial Double Bass Chair and Professor of Orchestral Training at the same school, with Head Professor Duncan McTier.

He was awarded in the I Contest of Young Performers of the Ministry of Culture, obtained as part of award a recital tour by the Spanish geographic, which was developed with great public success and received a great reception from the critics.
He was also selected in the Geneva International Competition and played at the Great Hall of the Conservatory of that city. He was also awarded in the International Major Virtuosi Nicanor Zabaleta Competition in San Sebastián.

He was part of the Orchestra of the Gran Teatro del Liceo and then got bass solo seat of the National Orchestra of Spain, who still holds. At his inception collaborated with the National Youth Orchestra of Spain (JONDE) as First Bass. With that orchestra has toured as a soloist, he participated in his presentation at the Royal Theatre and, later, he has taught in numerous working and training meetings.

As a soloist, he has also performed with numerous formations that include Soloists of Cataluña and Bilbao Symphony Orchestra, among others.

He has given recitals at the Reina Sofía Art Center, organized by the Center for the Diffusion of Contemporary Music (CDMC), which has premiered works by authors such as Francisco Luque and Javier López de Guereñas; Juan March Foundation, where he opened a series devoted the bass for two seasons; European Congress of Professors of string; and International Festival of Cadaqués.
He has made numerous solo recordings for RNE and RTVE.